The oldest and most dedicated WoW server Community since 2010.
https://login.truewow.org/forum/

by Relina
Download Pingzapper.
Create an account, I'd suggest using the free trial version for about a month or two before you decide if to pay for their service, while the free trial only lasts a week you can just create a new account as the trial period ends to keep testing it. 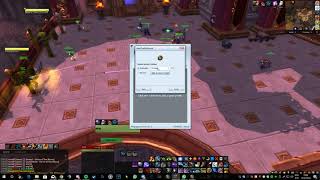 So till I can set aside some time to record a video specifically for Truewow the video linked above should help as a stop gap.
All the steps shown are what would be needed to use Pingzapper for Truewow, other than the step to specify wow.exe shown in the video using wow64.exe which is used for MoP.
Thanks to Heverton Souza for the creation of this video guide.

by Axis
The author of this thread has been requested to overhaul this guide since the old image links are obsolete now.
The download link still works, so feel free to use it.

by Wildfather
What exactly is the point of this?

Self explanatory.
It's a program used alongside games to help deal with latency issues, especially in ping sensitive games / situations.
For some it has a major effect on their gameplay while others only experience a minor change.

by Nyeriah
It’s a connection tunneler that helps if you’re having issues with bad hops between you and the server, as it forces the communication to go through a different route. That being said it’s useless if the route isn’t the issue or if your latency is naturally high due to the distance between you and the server. It may also make things worse depending on the server you tunnel it through.

I have used pingzapper for years when playing on private servers, it’s definitely helpful and has saved me a handful of times. Still ain’t a miracle worker though.

by Eronox
Been using it for years me as well.

by Wildfather
Ah ok, didn't even know it existed. Totally my bad lol

by ptkearney
I wonder if this will have any effect on those playing from New Zealand?
All times are UTC+02:00
Page 1 of 1
Powered by phpBB® Forum Software © phpBB Limited
https://www.phpbb.com/